It’s a good day for… 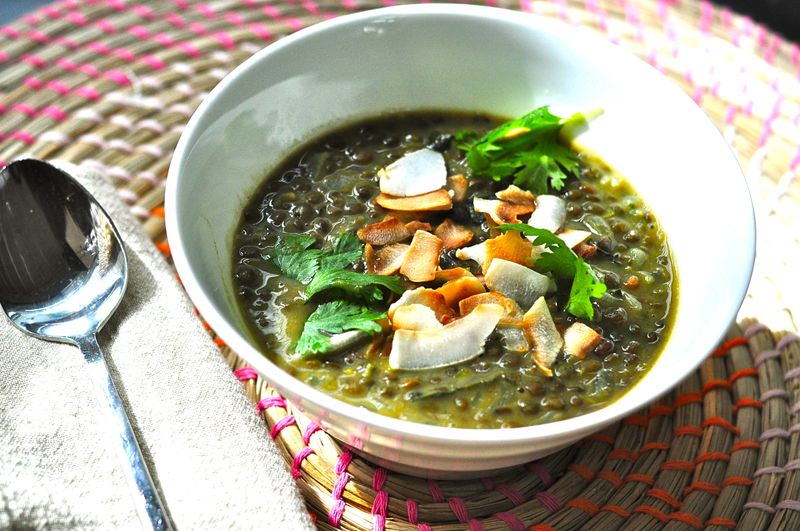 Soup. It doesn’t take much of a dip in temperature to convince me it’s a good day for soup. As a meal, it just accomplishes so much: warming, grounding, full of flavor, easy on digestion, often a jumble of ingredients that just work together when held together with broth. This meal was brought to you by one of my favorite cooking blogs Sprouted Kitchen (if only I could learn how to photograph food like that!) Besides being pretty simple to make, it tastes a lot like my favorite Thai Tom Kha soup in it’s tangy, creamy, coconutty-ness, but this with the added nutritional benefit of lentils. And with that, I hereby usher in soup season around here (the occasional 85-degree day be damned.)

{adapted from The Sprouted Kitchen}

a few handfuls of swiss chard, spinach or kale

Add the rinsed lentils, broth, thyme and tumeric or curry powder to a large pot. Bring to a boil, turn down to a simmer and cook for about 20 minutes.

While the lentils cook, heat the coconut oil in a pan. Add the onion and saute until just browned. Add the lemongrass, salt, cardamom, ginger, cinnamon, pinch of red pepper flakes and some fresh ground nutmeg and saute another minute. Add the onion mixture to the lentils and stir, keeping the heat on a low simmer.

Add the coconut milk and greens and simmer another five minutes, stirring occasionally until just wilted. Taste for salt and spice and add as you prefer. Finish with the citrus juice and serve warm with toasted coconut flakes and cilantro on top.