I let him down 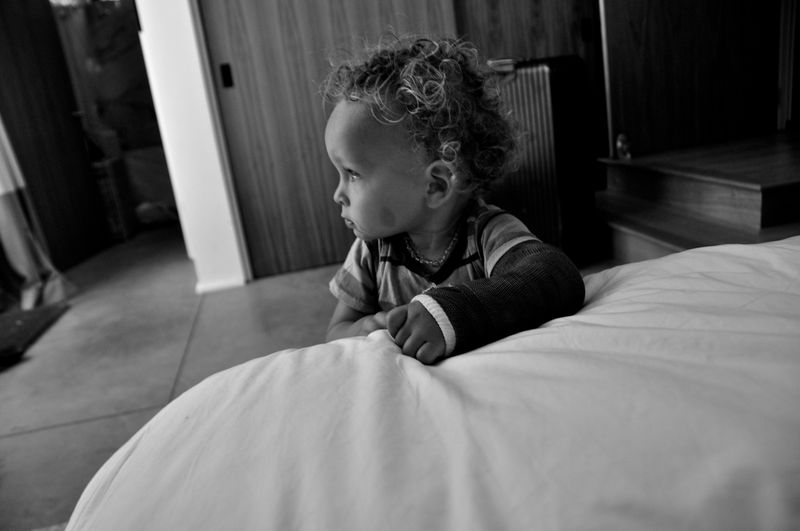 See that thing on Jude's arm? It's not a long-sleeved shirt. It's a cast. Yes, a cast. A ridiculous cast. 18 month-olds should never have to need a cast. But they can…need a cast.

You would think think that by our third child we would have this parenting and safety stuff down. Every low cabinet door with dangerous chemicals lurking behind it should be latched shut. No toilet brushes left out. Any stairs need to be guarded by baby gates. That car seat has to be rear-facing until 24 months. And on and on. All of which we've somehow managed to do.

But the bumper pad that was in his crib? Hadn't really given it much thought since we put it in quite a while ago. A crib just seems more comfortable with one, and we waited to include it until there was no longer any risk of SIDS. And guess what, both Mateo and Nico had one and there had never been a problem with them until…

Sunday morning when there was a thud and a cry that sounded exactly like a little boy falling out of his crib. Did he fall on his head??? That's a long way to fall! What if he has a head injury??!! How did he climb out?? Those were the questions we asked ourselves as we drove to the ER. A certain F-word kept stabbing me in my head. Over and over. How did I let this happen?

A few hours later, out we walked with Jude cradled in my arms and his arm cradled in a splint. He had a tiny fracture that would heal quickly we were told, owing to the soft, pliable nature of a young child's bones. But it might as well have been my arm. I couldn't help but feel so bad. I warmed my hands and placed them gently on his injured wrist hoping I could impart some healing energy and in some way to say I was sorry.

He must have stepped on that bumper to have been able to lean over and fall out, so we banished it as soon as we got home.

Jude seems to be just fine. It amazes me how quickly kids his age can adapt to things. For all he knows that cast will be there forever, so he just keeps on. He's figured out how to use only one hand to get up and sit down. He's learning how to balance with one side of his body suddenly heavier than the other.

I know people automatically judge when they see him in a cast. I'll admit I've done the same when I've seen it in the past. "How could a parent let that kind of injury happen to such a young child?" I'm sure they're asking themselves, while giving me a sideways glance. There's not much I can do about that obviously, other than know that sh** just happens sometimes.

Jude's a resilient boy. He has to be. Our home can be chaotic at times, and I can tell he really wants to keep up. Sometimes in that chaos he gets knocked down, but he always springs right back up. It's just his way. And probably always will be.

When he was born, I was under the impression that all of my mothering experience would just guide me though. But in some ways it just hasn't. Life is so much busier now. Not only by virtue of having two older kids and juggling both of their lives, but also my repsonsibilities and work just increase. Jude often has to join the flow and just roll with it. I'm told it makes for very well-adjusted adults. I can only hope.

But for now, I just want to take more pauses to make sure our littlest one is still cared for in the best way. That was always a priority, but this has made me really want to stop a moment. Take a breath. Know that I will most assuredly make more mistakes in the future, but also make peace with the ones just past. I hope Jude, that by the time you can read this, that cast will only be a distant memory. And I hope, for rme as well. Unless, of course, you do something crazy reckless when you're older. Well, just don't do that either. Okay?